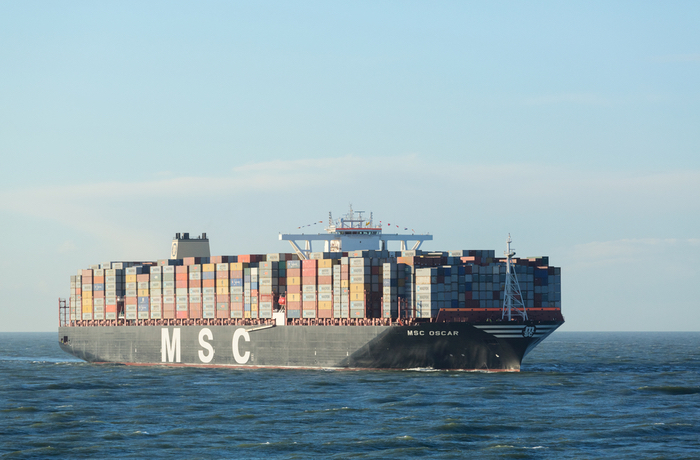 The call of the MSC Oscar (pictured) in LA-LB could be followed by other upsized vessels. Photo credit: Shutterstock.com.
The 19,000 TEU MSC Oscar will call in Los Angeles and Long Beach this weekend to begin the task of evacuating empty containers from Southern California and returning them to Asia so the port complex is not choked by empties when normal trade patterns resume.

The move underscores the rising pressure on marine terminals, import distribution centers, and truckers to begin clearing out the backlog of empty containers that has been accumulating over the past month in the expansive Southern California region. The backlog has occurred because carriers in the trans-Pacfic trades have canceled dozens of sailings due to plunging container volumes following Lunar New Year and the subsequent halt in Chinese manufacturing amid the coronavirus disease 2019 (COVID-19).
The blank sailings removed so much vessel capacity that shippers and exporters in the Midwest who rely on the Southern California gateway are struggling to secure space, Mario Cordero, executive director of the Port of Long Beach, and Gene Seroka, executive director of the Port of Los Angeles, told the DrayTech meeting in Long Beach Thursday.
The call of MSC Oscar in LA-LB could be followed by other upsized vessels. The port directors said they expect at least two such vessel calls, and possibly a third, in the coming weeks.
“These big vessels are of a size that normally don’t come here,” Cordero said. The TP6 service from Asia normally features vessels of 14,000 TEU capacity. MSC Oscar will call at APM Terminal’s Pier 400 facility in Los Angeles, and will then stop at the Total Terminals International facility in Long Beach before heading back to Asia.
Empty containers are building up across the approximately 1.8 billion square feet of industrial and warehouse space in Southern California, and in the yards of the 6,000 to 7,000 drayage operators who regularly serve the port complex, the port directors said. Terminal operators anticipate growing US exports, especially as consumption of US agricultural products picks up in Asia.

Outbound vessel capacity has been significantly restricted in February and March because carriers have canceled more than 40 sailings to Los Angeles-Long Beach, Seroka said. That has hampered the shipment of both loaded export containers and empty containers to Asia.
It is critical that carriers, terminals, and truckers, facilitated by port authorities, begin returning empty containers to Asia now to head off a crushing return of empties and export containers to the terminals in the coming weeks.
“We have to clean this situation up,” Seroka said. “The pendulum is going to swing back. Within a couple of weeks we’ll be coming to a tipping point.”
The port directors did not speculate as to when two-way trade through the largest US port complex would return to normal. The ports last week said volumes in February declined 25 percent in Los Angeles and 6 percent in Long Beach from February 2019, and their Q1 volumes would be down 12 to 15 percent. The year-over-year declines are driven by the closure of factories in Asia after Jan. 25 for the Lunar New Year celebrations, and the extended factory shutdowns in China to contain the spread of COVID-19.
The port directors said their joint supply chain optimization group, which includes stakeholders from the transportation sectors and labor unions, is kicking into higher gear to prepare for a possible spike in container volumes in the coming weeks. The uptick that is beginning now will accelerate as factories in China continue to ramp up production, and as US export volumes rebound, Cordero and Seroka said.
Contact Bill Mongelluzzo at bill.mongelluzzo@ihsmarkit.com and follow him on Twitter: @billmongelluzzo.